The Charity of James and Thomas Sawyer 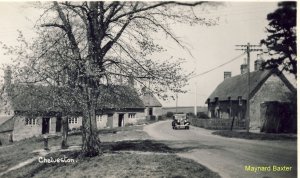 The alms houses, before being sold and demolished. 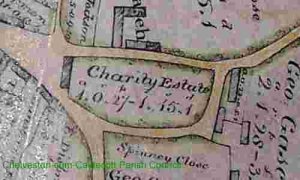 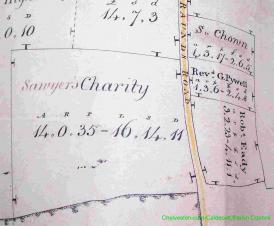 James Sawyer (d:1692) and his son Thomas (d:1694) in their lifetimes erected four alms-houses in Chelveston for four widows (two each from Chelveston and Raunds). Provisions were made in James's will (proved 1703) for all his lands, goods, etc. in Chelston and Denford to be held by 16 trustees to provide funds to maintain the alms-houses and support their inmates. During the Inclosure of the parish, these lands were commuted into two plots - Captains' Close and Hospital Close (later Hospital Field).

A tablet above one door was inscribed "This House was erected by James Sawyer, gent. and Thomas Sawyer his son, and Ten Pounds per annum by them therewith given for the use of four poor windows for ever toward their maintenance, Anno Domini 1708". The tablet was given to Mrs Mabel Meadows of Chelveston when the alms-houses were demolished.

By 1911 there were two serviceable alms-houses plus a former alms-house. One for a resident from Chelveston & one from Raunds.

In May 1941, a disused alms-house was temporarily used as the HQ for the Chelveston Fire Watchers (watch keepers for incendiary bombs, etc.). By 1945 it was being used as a "Buffer Store" (a government emergency food store) and was last used in the snow of 1947 when the village was cut off for 10 days.

The charity now derives its income from the rent of the land now known as Hospital Field and provides benefits to residents of each parish who are in condition of need, hardship or distress. No periodical or recurrent benefits are permitted to any individual.

There can be up to six trustees, plus a Clerk to the Trustees.

Two representative trustees are appointed each by Raunds TC and by Chelveston-cum-Caldecott PC. These serve for 3 years and may be re-appointed.

Two co-optative trustees are appointed by the representative trustees, one from each parish. These serve for 7 years and can be re-appointed.

Mrs Pauline Ellis, of Raunds, is the Clerk to the Trustees