Chelveston-cum-Caldecott Parish Council first met on Friday 4th January 1895 in the village school (now the Village Hall) and has been going strong ever since! There are 7 Councillors, supported by a Clerk, who is also the Responsible Financial Officer or RFO. 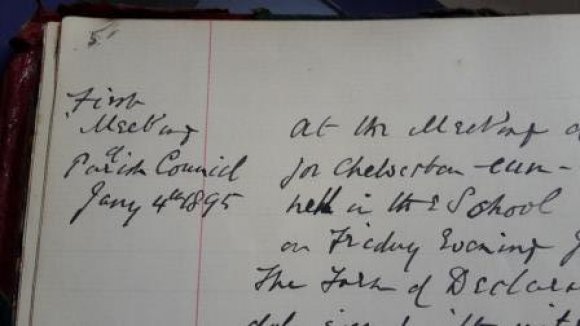 Minute book record of the first meeting of the Council

The next ordinary elections will be in May 2025, and will coincide with the Unitary Council (NNC) elections. Should a Councillor cease to hold office (death, resignation, etc.) then a "casual vacancy" is created. This can be filled by a by-election (if demanded) or else by co-option. In either case the new Councillor serves the remainder of the term until the next ordinary elections. 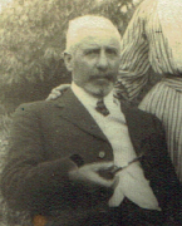 E. Jabez Browning, the first Chairman of the Parish Council in 1895.
This image was taken around 1908. By kind permission of Jessica Leslie, San Antonio, Texas, USA

What the Parish Council does

The meetings of the Parish Council are normally held on the second Monday of the month at the Village Hall in Caldecott Road.

The Parish Council's responsibilities currently include -

Since the Council was created in 1895, two Councillors, a former Councillor, and one Clerk have held honours.

We have one part-time Clerk, plus a number of volunteers who pick litter, check on the footpaths, deliver the parish newsletters, etc.

If you have a problem to report, this can be done by phone, e-mail or using the on-line form.

The Clerk to the Parish Council