The Church viewed from Bidwell Lane.

The church is set back from the Caldecott Road and sits within the churchyard, which is still open for burials and internment of ashes. The Friends of St John the Baptist Church supports the maintenance of the fabric of the church and churchyard.

Amongst the items in the church is copy of the "Book of Governors", a gift from the 305th Bomb Group Memorial Association on their 50th Anniversary visit in 1992.

In the last century, electricity arrived during 1951-2, the Lady Chapel was restored in 1967 and a water supply was laid in to provide a servery area for functions in 2004. A toilet was also installed at that time.

A sound system was introduced in 2014 and a new all weather path was installed in 2019. A new water supply and broadband fibre were laid in as part of the path works. 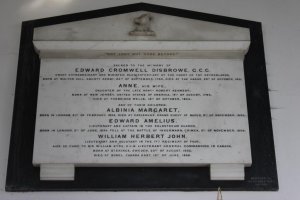 James Moyes Gray is buried in Markinch, Fife. His brother Thomas Malcolm Gray (-1905) was a Honorary Sheriff of Fife.

The 60ft high tower on the north side of the church contains 5 bells in a wooden frame which have not been ringable since the 1970's. The clock was installed in 1867 for £86. At the base of the tower is a memorial to the 305th Bombardment Group that flew out of RAF Chelveston from 1942-45.

Henry Penn (1685-1729) served his apprenticeship under his uncle Henry Bagley at the bell foundry at Ecton. He moved to Peterborough and established his own bell foundry at Rivergate, to the south of the Cathedral precincts. In 1709, at the age of 24, he won the contract to cast a set of 10 bells for the Cathedral. He died in 1729, aged 44, having cast some 250 bells for approx. 100 churches and country houses in the surrounding counties.

Thomas (I) Eayre (1691 - 1757) was a bell founder and clockmaker in Kettering. His foundry was established around 1717, and located in Wadcraft Lane, Kettering, with over 200 bells cast. His son, Thomas (II) Eayre, succeeded him in the business after his death, but unfortunately went bankrupt in 1762, with no further bells being cast under the name of "Thomas Eayre". Joseph Eayre (1707 - 1770), the youngest brother of Thomas (I), who had established a bell foundry in Priory Lane, St Neots in 1735, took over the Kettering bell foundry.

Thomas (I) Eayre and Henry Penn appear to have competed for work, until Henry's death in 1729. One might speculate that as Henry had installed the Tenor and 2nd Bell in 1727, had he lived longer he would have been the favourite to install the Treble in St John's in 1744.

Robert Taylor (1759 - 1830) was apprenticed to Edward Arnold, who succeeded Joseph Eayre at the St Neots bell foundry when he died in 1770. Edward may have been a cousin or nephew of Joseph, and was a brewer as well as a clock and watchmaker. In 1778 he opened another bell foundry in Leicester and sold the St Neots business to Robert.

Robert originally rented the Priory Lane premises from Edward, but in 1789 Robert set up a new bell foundry in Cambridge Street, St Neots. Robert cast at least 29 bells at this site, before the premises were destroyed by fire in 1821. The 3rd and 4th bells of St John's would have been cast there.

In May 2012 an electronic carillon bell sound system was installed, which can be heard using the YouTube link below.

The benefice is currently interregnum (vacant period between priests)

The Churchwardens are Arthur Wright and Peggy Deards.

A sung communion service is held at 9:00 on Sundays.