What was the 305th Bomb Group?

The 305th Bomb Group, known as the "Can Do" group completed 480 missions, flying B-17 "Flying Fortresses". They lost 158 aircraft and 769 personnel died whilst carrying out 9,231 aircraft sorties.

What is the memorial?

The memorial uses local stone and polished granite with the former windsock mast from the main "J" hanger supporting a B-17 weather vane. It measures 23ft (7m) from the base to the top of the mast.

It was built in the centre of the village of Chelveston, during 2006 -7. 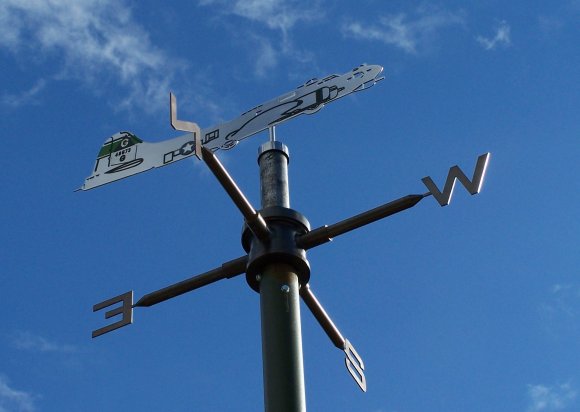 Who paid for this?

The 305th Bomb Group Memorial Association and the Parish Council opened a public subscription to fund the work in July 2005. By the time the appeal closed in July 2006, over £21,000 ($42,000) had been raised. Donations came from the 305th Bomb Group veterans and their families, from the villagers, from local businesses, from heritage grants and from people far and wide who felt this was worth supporting.

When was it dedicated?

The dedication service was held on Saturday 26th May 2007 (i.e. near to the American WW2 remembrance day). 15 US veterans and 39 family members came over to attended the service, watched by approx. 400 members of the public.

The service was conducted by the Rev Canon Grant Brockhouse (the then parish priest), with Cllr Adrian Dale (the then Chairman of the Parish Council) as the Master of Ceremonies.

Sadly Billy Donald, who was the inspiration behind the memorial, passed away on Saturday 3rd May 2008. His funeral service was held in the parish church on Tuesday 13th May 2008 and conducted by the Rev Canon Grant Brockhouse.

Cllr Adrian Dale, on behalf of the parish, gave the eulogy. As Billy's coffin was led out of the Church by a lone Scottish piper, a T-6G Texan paid tribute from the air.