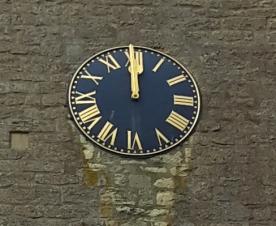 There is a public clock on the east side of the tower of St John the Baptist Church, Caldecott Road.

The 60ft high tower contains 5 bells - the treble by Thomas Eayre of Kettering (1744), the third and fourth by Taylor & Son of St. Neots (1819), and the second and tenor by Henry Penn of Peterborough (1727) - which are no longer functional.

In 2012 an electronic carillon bell sound system was installed, which also sounds the striking of the hour.