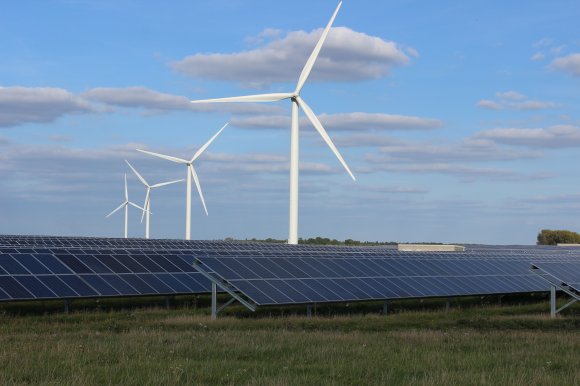 CRE Ltd have put forward a number of development proposals since then, some of which have encountered resistance from the local communities. The renewable energy site is operational with a theoretical maximum output of 83.15MW (wind and solar).

Under agreement with the Local Highway Authority, all HGV traffic to and from the site is required to follow a route (known as "Route B") that keeps it away from main residential areas.

Under agreement with the Local Planning Authorities, a number of landscaping schemes to reduce the visual impact of the developments are to be carried out.

The 25.65MW Wind Farm, consisting of 9x 125m high 2.85MW turbines, became operational on 1st October 2013. The turbines were produced by the General Electric (GE) Power Division and operate at wind speeds between 3 and 25mph. The images below show some of the construction works.

As part of the Wind Farm planning appeal submissions, CRE Ltd entered into a unilateral s106 agreement to provide a Community Benefit Fund for the 4 surrounding parishes (Chelveston-cum-Caldecott, Dean & Shelton, Hargrave and Melchbourne & Yelden) in line with the RenewableUK Community Benefits Protocol.

As part of allowing the appeal, the planning inspector required CRE to demolish a 55m high redundant microwave tower on the site.

According to Tamesol (Spain), the panels used are type TM-P660250 polycrystalline with 60 cells per panel, rated at 15.98% efficiency and a max output of 250W per panel. In total Tamesol supplied more than 65,000 units, from their manufacturing plant in Malaysia, for the first phase of the solar installation.

CRE submitted an application for a 20MW Energy Storage Unit, largely consisting of battery units and associated electrics. The unit is required to address a problem common to all solar farms, namely their peak output is around noon, whilst the grid's peak demands are in the morning and early evening.

CRE has been granted consent for a small scale Hydrogen Generation plant, using the electricity produced by the wind and solar farms to split water into Hydrogen and Oxygen. The Hydrogen gas will be stored onsite, with the intention to use it to power Heavy Good Vehicles (HGVs) as an alternative to mineral fuels (e.g. Diesel).

CRE has been granted consent for a 47MW gas fired power station, with four 10MW engines running on natural gas (fossil fuel) and a 7MW dual fuel engine that can run either on natural gas or bio-gas.

CRE has been granted consent to build an industrial estate at the southern end of the CRE Park site, the Chelveston Energy Innovation Park or CEIP, consisting of 10,000 sqm of warehousing (6 buildings in B2/B8 Use Class) and a 4,900 sqm building for vertical farming (in a horticultural/agricultural use), with outline application for a further development of up to 18,000 of warehousing.

This was part of a hybrid application that will see businesses relocated from an existing industrial estate by the A6 bypass at Higham Ferrers, then the Higham Ferrers site redeveloped for housing.

Details of the application are here. 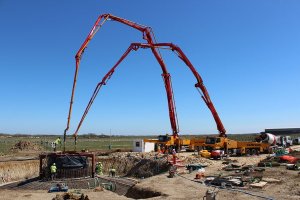 Camfaud Concrete Pumps Ltd filing foundations on 1st May 2013.
Click on the link to read their article on providing concrete to the site 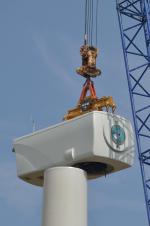 Roocroft installed over 4,500 posts for the solar panels between November 2013 and February 2014.
Click on the link to read their article on installing posts on the site.