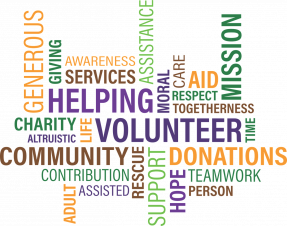 Most towns and rural villages have a number of local charities set up to help the sick and needy, dating back to a time before the provision of state benefits such as pensions, free education, or access to free medical treatment. Chelveston is no exception.

Click on the links below to see details of the Charities that operate (or operated) within the parish.

There are a number of active local charities operating in the Parish. The Parish Council has the right to appoint or nominate Trustees to most of these.

For more information on the general working of charities, please check the Charity Commission website for details.

The charity was created to run a new village hall in the former school rooms, following the closure of the school and the demise of the Village Institute (see below). The Association charity leased the school rooms from the Educational Foundation charity (who owned the building). In 2010, following several years of problems between the two charities, the parishioners requested the task of running a village hall be transferred to the Educational Foundation alone, and the Association charity was wound up and has been removed from the register of charities.

The charity was actually created in order to sell off the former Village Institute land, after it had collapsed in the snow of March 1970. When the committee decided to sell off the land, they discovered there was no formal body that held the title to the land. Advice from the Charity Commission was to create a new charity, which would accept and register the assets of the committee and could then legally sell the land. The charity was wound up in 1997 and has been removed from the register of charities.

His Will (dated 8 November 1929 and proved 26 March 1931) provided £75 to be invested and required that 2/3rds of the income derived went toward the maintenance of the church, whilst the remaining 1/3rd be spent on providing coals for the poor widows of the parish. The charity was wound up in 2003 and has been removed from the register of charities.

Thomas Neale in his Will (dated 5 January 1765) left a legacy of £20, the income from which was to be distributed on Christmas Day at the church by the minster and Churchwardens to the poorest and most necessitous people of the parish. By 1849 the income was 20s (£1) per year, dropping to 12s (60p) in 1937. The charity was wound up in 2003 and has been removed from the register of charities