Re-dedication service on Saturday 27th May 2017.

In late 2016, the Parish Council decided the 305th Bombardment Group memorial needed some tender loving care, and made arrangements for it to be cleaned and repaired the following Spring. The 305th Bombardment Group Memorial Association (BGMA) UK Representative, Ian White, was contacted to ask if they wished to hold a Re-dedication service on the 10th anniversary of the memorial.

The 305th BGMA focused on the veterans' families tour, whilst the Parish Council covered the memorial service and a 1940s themed community event at the nearby Star & Garter.

The memorial site was steam cleaned, and the stonework and paving received repairs by the local stonemason, Robert Farrow. Steve Abbot (of Abbots Fabrications) modified and enlarged the original dedication plaque framework he had built in 2007 to take a new plaque for the 10th anniversary. 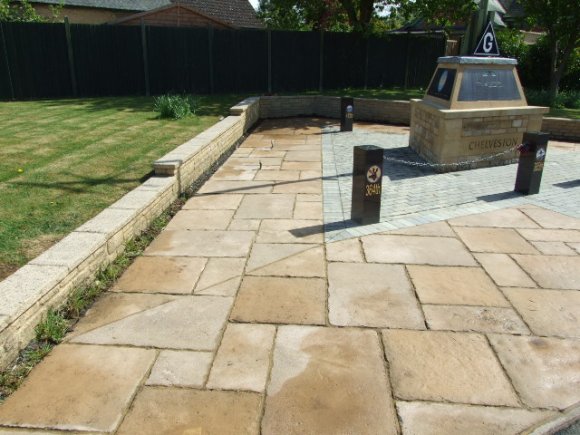 Memorial and paving after steam cleaning 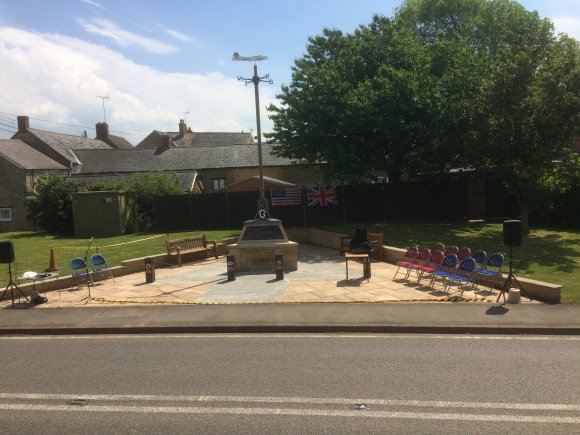 All set up and waiting!

Transport between the former airfield site, the Church and the memorial was provided by the Trucks, Troops and Stores WW2 vehicle group, under the direction of Billy Betts. 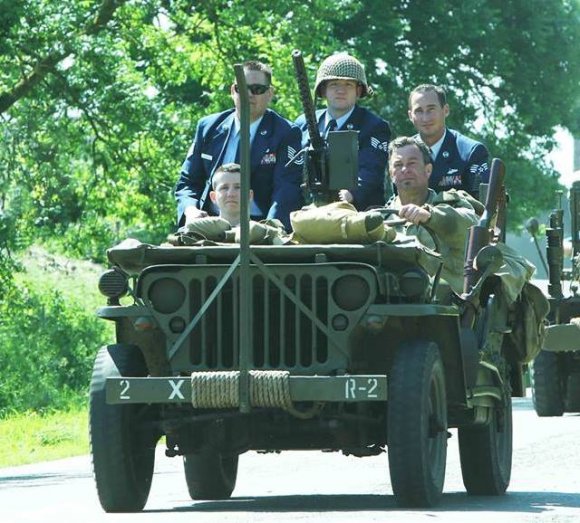 TTS convoy with the 305th Air Mobility Wing on board! (image by John Routledge)

The service at St John the Baptist Church was conducted by the Reader, Debbie Smith-Wilds, with the lesson read by the USAF Chaplin, Capt James (Matt) Henry. After the service the visitors moved to the base of the church tower by the 1980s memorial to the 305th Bombardment Group.

A wreath was laid at the tower memorial by Rebekah and Will Hastings, and their 4 year old son, Liam. Rebekah's Grandfather was Harold Pop Wiley, a pilot of the 365th Bombardment Squadron.

(Image by Joint Base McGuire-Dix-Lakehurst)

The weather stayed fine for the memorial Re-dedication service, with 20 USAF personnel from the 305th Air Mobility Wing (the present day successor to the 305th Bombardment Group) having flown in the previous day from McGuire Air Force Base, NJ, USA, under the command of Col Clinton ZumBrunnen, plus around 35 family members and one 94 year old veteran, Doug Ward, of the 305th BGMA.

Doug had flown a total of 37 missions, 9 of which he did at the start of his military service, while flying from Foggia Italy, with the 301st Bombardment Group, 15th Air Force. He came over to Chelveston in 1944, and flew the remaining missions as Ball Turret Gunner with the 364th Bombardment Squadron, 305th Bombardment Group, 8th Air Force. He was awarded the Air Medal, Four Oak Leaf Clusters, and the Distinguished Flying Cross.

A honour guard was provided by the 423rd Air Base Group from RAF Alconbury, under the direction of Staff Sgt Mike Joy. The Raunds branch of the Royal British Legion provided a Standard Bearer, Stephen Clements, and Alex McLean played the trumpet.

The Master of Ceremonies was Cllr Glenn Harwood MBE. 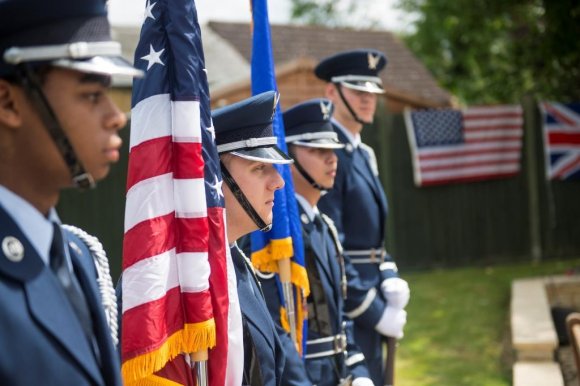 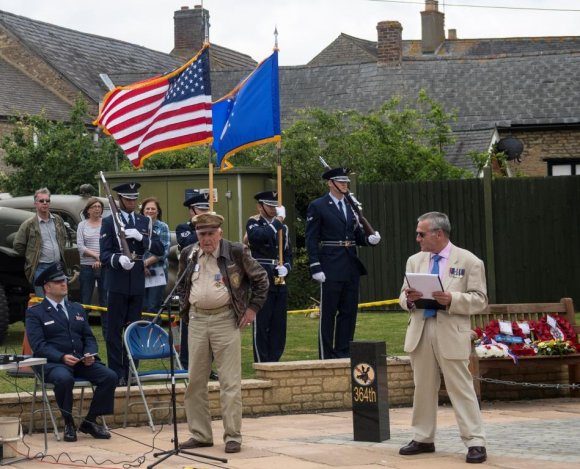 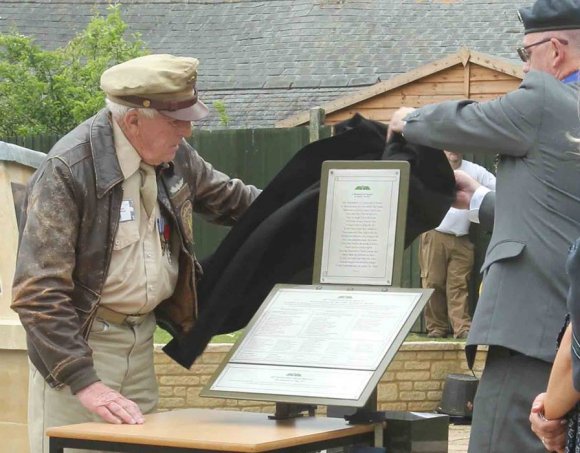 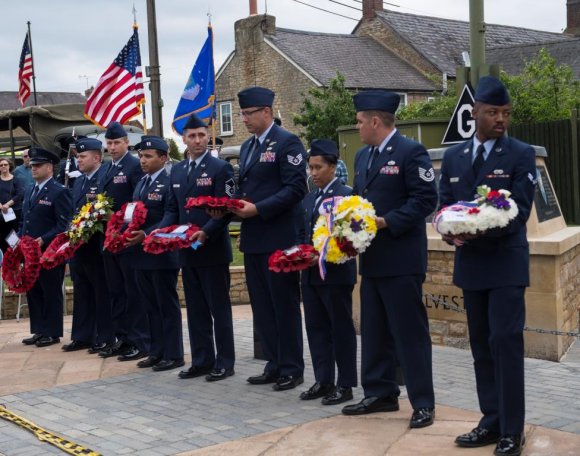 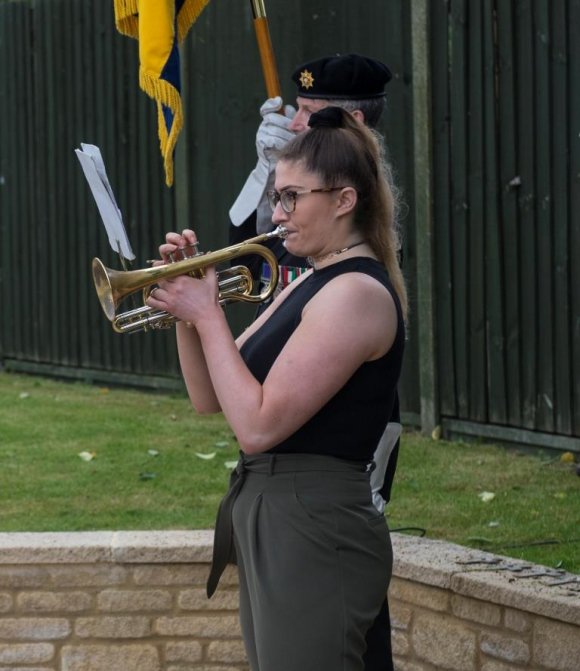 Cllr Liz Kelly and her newly formed Community Events Committee organised a 1940s themed afternoon and evening event at the nearby Star & Garter, with singers and musicians. Several people even managed to dress accordingly in 1940s attire! 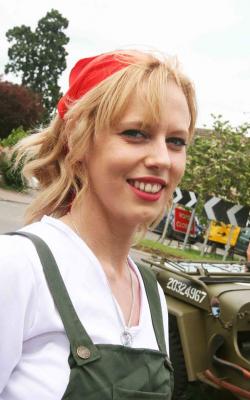 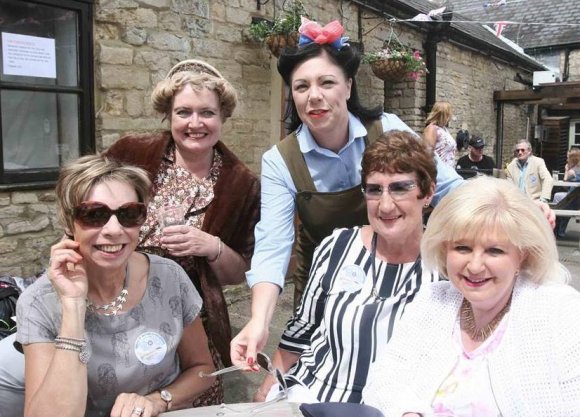