The 305th Bomb Group Memorial Association (BGMA) organised a tour of veterans and families to England in 1992, to mark the 50th Anniversary of the 305th BG arriving at RAF Chelveston on 3rd December 1942. The tour was lead by Major Harry Task with 95 veterans and family members attending

In Chelveston, the church service was held on Sunday, 20th September, after which Americans were driven in old military vehicles to the Star and Garter, where a fete was staged. An Avro Vulcan (XH558 on its final flight with the RAF Vulcan Display Flight) and the Red Arrows gave a flypast, and a flying display was given by a P-51 Mustang. Proceeds from day went to the church restoration fund. 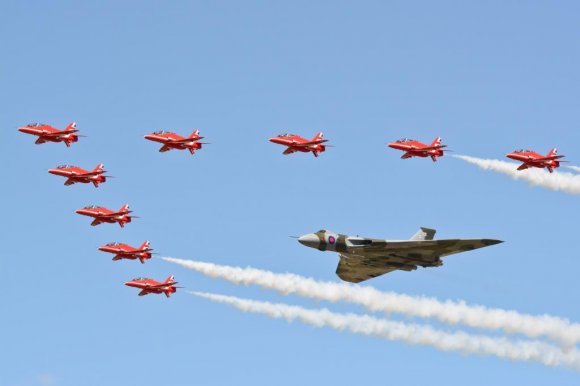 The Book of Governors

The 305th BGMA formally presented two gifts as part of the 50th Anniversary visit, being a collection of letters signed by all 50 State and Territory Governors of the United States of America in a loose leaf folder book. One book was presented to Higham Ferrers Town Council and the other to Chelveston-cum-Caldecott Parish Council.

However, not all the Governors provided two letters, so parts of the original books are also copies (about 20%). The Chelveston "original" was initially to be placed in the church, but the Parochial Church Council didn't like the planned cabinet and so in March 1993 it was agreed to make a copy of the book to display openly (i.e. less valuable if stolen). The Parish Council looked at putting the original in a bank vault, but this was considered too expensive, so in July 1993 it was agreed that it would be held by the Parish Council Chairman.

This continued for a couple of years, until a resolution by the Parish Council in September 1996 decided that the Chelveston original should go to the Northants Records Office (NRO). There was some local reluctance and it was not until 2007 that it was finally deposited.

By 2014, the copy in the church was looking rather worn, so it was agreed to draw the original from the NRO and make a new copy, which was bound into book form by Stanley L Hunt (Printers) Ltd of Rushden at a cost of £77. The new copy was presented to the church by the Parish Council in October 2014. An online copy was made at the same time.