4th September 1941 - No.819 Defence Squadron formed at RAF Chelveston, under the command of Flying Officer J.M.Reiss.

4th December 1941 - Central Gunnery School arrived as a lodger unit. A Pilot Gunnery Instructors Training Wing was formed as part of the School. 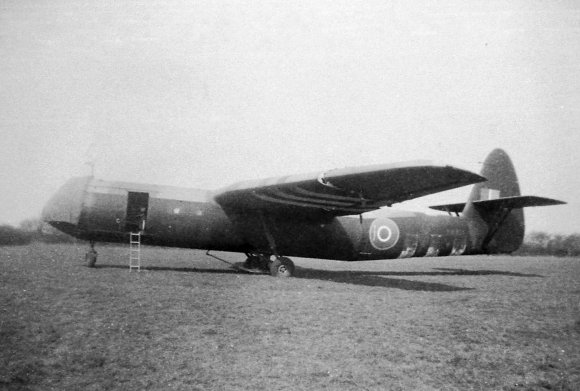 3rd June 1942 - A small Hotspur glider of AFEE broke up mid-air and crew baled out. One injured and one uninjured.

A Second World War bombing decoy, known as Q144A, was built at Swineshead to deflect enemy bombing from RAF Chelveston airfield. This was a 'Q-type' night decoy, which displayed a sequence of lights to simulate an active airfield. It was reported as being in use by 12th August 1942. Nothing remains of the site.

(Technically the USAAC had been renamed by the US Congress as the United States Army Air Force (USAAF) on 20th June 1941, but somethings take time to flow down!) 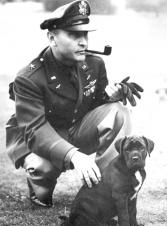 Brig-Gen Ira C Eaker - he would become the commander of the 8th Air Force in December 1942.

27th June 1942 - Mr John Gilbert Winant (US Ambassador 1941-46) accompanied by Brig-Gen Ira C Eaker and Maj-Gen Carl Andrew Spaatz (Commandeer of the US 8th Air Force from May 1942), visited and inspected the station. 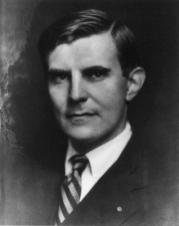 John G Winant, US Ambassador to the UK 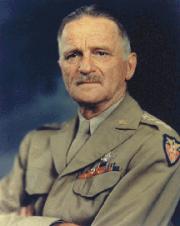 5th September 1942 - First operational combat mission - 5x B17F's from 352nd Sqn and 7 from 419th sqn left to attack the Engine Sheds at Roeun (France), but 1 aircraft from each Sqn returned early with engine problems. The other 10 aircraft, escorted by fighters, dropped 40x 1,000 lbs bombs from 25,000 ft, obtaining bursts on the target and target area.

9th October 1942 - During the mission that day, on the steel and engineering works at Lille (France), two aircraft were damaged. One made a wheels up crash landing at RAF Earls Colne (Sussex) with two severely injured crewmen, whilst the other (124362 Lt Swenson) made a forced landing in the Channel. The crew all safely made it to the dinghies and were picked up by the Air Sea Rescue Service in 30 mins. 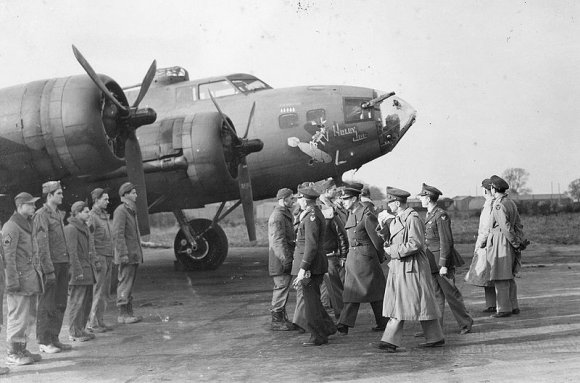 King George VI passes a B-17 Flying Fortress nicknamed "Holey Joe" as he meets personnel of the 301st Bomb Group during a royal visit to RAF Chelveston.

3rd December 1942 - 305th Bombardment Group (364th, 365th, 366th and 422nd Sqns) arrived at RAF Chelveston, under the command of Col Curtis LeMay. Initially the 305th didn't have the success of the 301st, as their first mission was scrubbed due to bad weather, as was the second the following day.

6th December 1942 - 24 B17s took off to attack Lille, with 3 returning early due to engine problems, 4 claiming to have bombed the target, but no results observed, 16 failed to bomb the target as the lead element turned off too soon, and one (124553) was lost to enemy action, exploding in mid-air. Other crews reported seeing 1-4 crew bale out and parachutes open.

12th December - 21 B17s took off to attack Romilly-sur-Seine (France), but the target was obscured by cloud, so all aircraft returned having jettisoned or brought back their bombs.

20th December - The 305th achieved success, with 18 aircraft bombing the aerodrome at Romilly-sur-Seine, for no losses.

4th April 1943 - Distinguished Unit Citation awarded to the 305th for its courage during a raid on Paris.

19th April 1943 - Station transferred to 1st Bombardment Wing, USAAF. Flt Lt H.W.C.Davies, RAF, handed over to Brig-Gen Fredrick Lewis Anderson, USAAF. There was no ceremony other than the hoisting of the "Stars and Stripes". 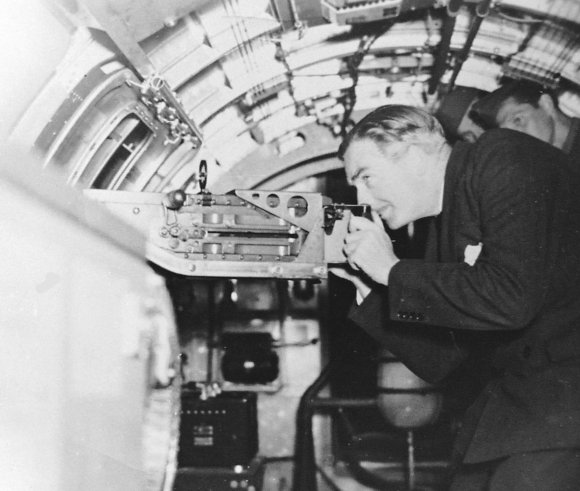 14th October 1943 - The 305th lost 13 aircraft during a raid on the Schwienfurt (Germany) ball bearing factories.

11th January 1944 - A second Distinguished Unit Citation awarded to the 305th for its courage during a raid on aircraft factories in Germany.

"For conspicuous gallantry and intrepidity in action above and beyond the call of duty, 20 February 1944, while serving as pilot of a B-17 aircraft on a heavy bombardment mission over enemy-occupied continental Europe. Coming off the target he was attacked by approximately 20 enemy fighters, shot out of formation, and his plane severely crippled. Eight crewmembers were wounded, the co-pilot was killed by a 20-mm shell. One engine was on fire, the controls shot away, and 1st Lt. Lawley seriously and painfully wounded about the face. Forcing the co-pilot's body off the controls, he brought the plane out of a steep dive, flying with his left hand only. Blood covered the instruments and windshield and visibility was impossible. With a full bomb load the plane was difficult to manoeuvre and bombs could not be released because the racks were frozen. After the order to bail out had been given, 1 of the waist gunners informed the pilot that 2 crewmembers were so severely wounded that it would be impossible for them to bail out. With the fire in the engine spreading, the danger of an explosion was imminent. Because of the helpless condition of his wounded crewmembers 1st Lt. Lawley elected to remain with the ship and bring them to safety if it was humanly possible, giving the other crewmembers the option of bailing out. Enemy fighters again attacked but by using masterful evasive action he managed to lose them. One engine again caught on fire and was extinguished by skilful flying. 1st Lt. Lawley remained at his post, refusing first aid until he collapsed from sheer exhaustion caused by loss of blood, shock, and the energy he had expended in keeping control of his plane. He was revived by the bombardier and again took over the controls. Coming over the English coast 1 engine ran out of gasoline and had to be feathered. Another engine started to burn and continued to do so until a successful crash landing was made on a small fighter base. Through his heroism and exceptional flying skill, 1st Lt. Lawley rendered outstanding distinguished and valorous service to our Nation".

(US Army Center of Military History)

"For conspicuous gallantry and intrepidity above and beyond the call of duty while serving as pilot of a B17 aircraft on a heavy-bombardment mission to Germany, 11 April 1944. The group in which 1st Lt. Michael was flying was attacked by a swarm of fighters. His plane was singled out and the fighters pressed their attacks home recklessly, completely disregarding the Allied fighter escort and their own intense flak. His plane was riddled from nose to tail with exploding cannon shells and knocked out of formation, with a large number of fighters following it down, blasting it with cannon fire as it descended. A cannon shell exploded in the cockpit, wounded the co-pilot, wrecked the instruments, and blew out the side window. 1st Lt. Michael was seriously and painfully wounded in the right thigh. Hydraulic fluid filmed over the windshield making visibility impossible, and smoke filled the cockpit. The controls failed to respond and 3,000 feet were lost before he succeeded in levelling off. The radio operator informed him that the whole bomb bay was in flames as a result of the explosion of 3 cannon shells, which had ignited the incendiaries. With a full load of incendiaries in the bomb bay and a considerable gas load in the tanks, the danger of fire enveloping the plane and the tanks exploding seemed imminent. When the emergency release lever failed to function, 1st Lt. Michael at once gave the order to bail out and 7 of the crew left the plane. Seeing the bombardier firing the navigator's gun at the enemy planes, 1st Lt. Michael ordered him to bail out as the plane was liable to explode any minute. When the bombardier looked for his parachute he found that it had been riddled with 20mm. fragments and was useless. 1st Lt. Michael, seeing the ruined parachute, realized that if the plane was abandoned the bombardier would perish and decided that the only chance would be a crash landing. Completely disregarding his own painful and profusely bleeding wounds, but thinking only of the safety of the remaining crewmembers, he gallantly evaded the enemy, using violent evasive action despite the battered condition of his plane. After the plane had been under sustained enemy attack for fully 45 minutes, 1st Lt. Michael finally lost the persistent fighters in a cloud bank. Upon emerging, an accurate barrage of flak caused him to come down to treetop level where flak towers poured a continuous rain of fire on the plane. He continued into France, realizing that at any moment a crash landing might have to be attempted, but trying to get as far as possible to increase the escape possibilities if a safe landing could be achieved. 1st Lt. Michael flew the plane until he became exhausted from the loss of blood, which had formed on the floor in pools, and he lost consciousness. The co-pilot succeeded in reaching England and sighted an RAF field near the coast. 1st Lt. Michael finally regained consciousness and insisted upon taking over the controls to land the plane. The undercarriage was useless; the bomb bay doors were jammed open; the hydraulic system and altimeter were shot out. In addition, there was no airspeed indicator, the ball turret was jammed with the guns pointing downward, and the flaps would not respond. Despite these apparently insurmountable obstacles, he landed the plane without mishap".

(US Army Center of Military History) 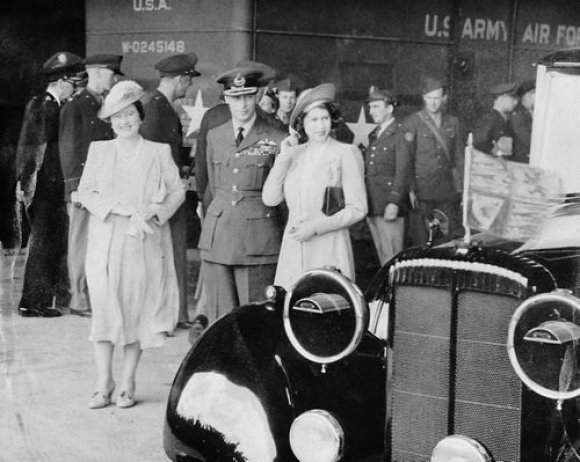 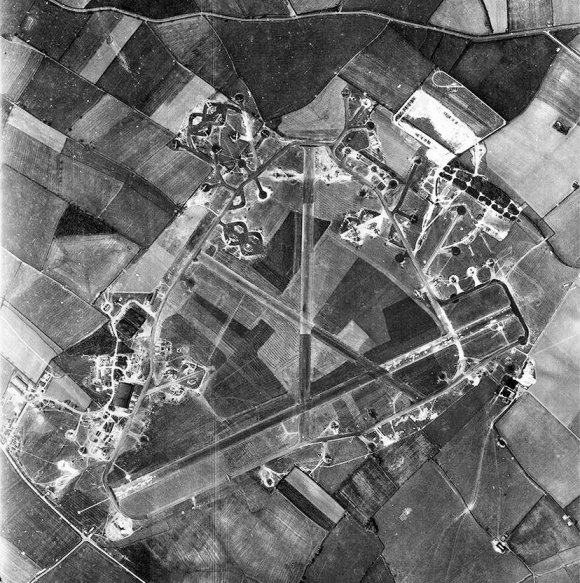 Aerial photograph of RAF Chelveston on 9th May 1944.
The road running along the top (north) of the image was the A45, now the B645.

February 1951 - Approx £50,000 worth of materials, including radio and radar equipment, were discovered to have been stolen from the site. A London gang that had raided several other Midlands storage depots was believed to be involved.

1st December 1952 - Station transferred to United States Air Force (USAF), and a completely new, longer runway (11,000 ft) was added for the 3914th Air Base Group. The base was used by the US Strategic Air Command (SAC), with B-47 Stratojets of the Reflex Alert Force. 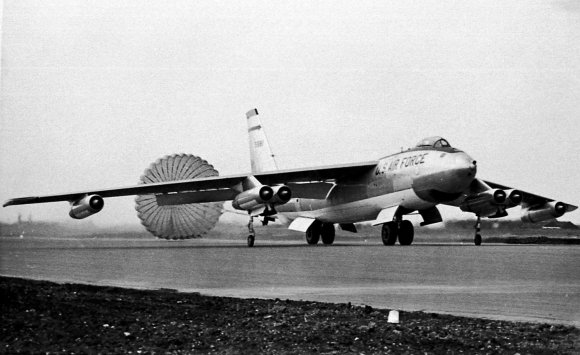 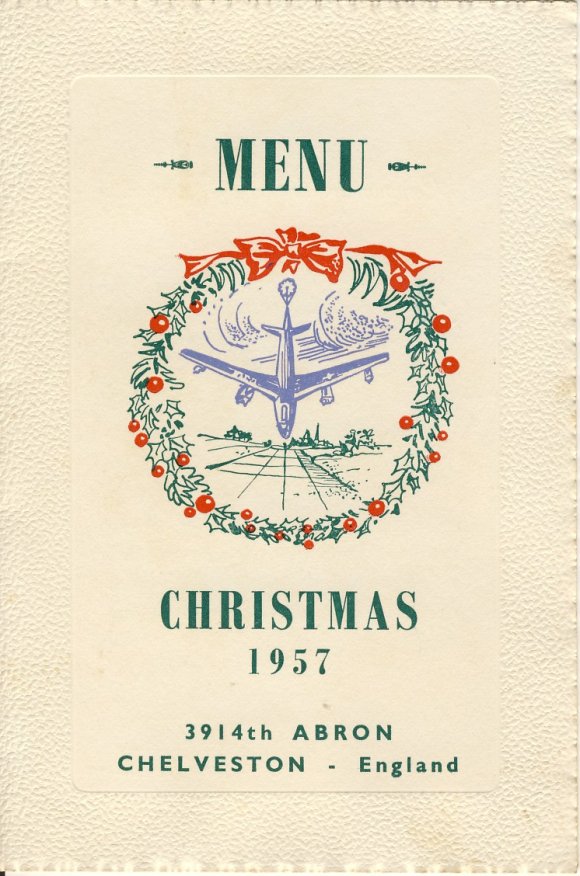 August 1962 - The base was closed under Operation Clearwater. The adjacent married quarters were retained for service personnel and families from other nearby USAF forces.

April 1977 - Runways broken up for crushing by Amey Roadstone Corp. A detachment from the 2130th Communications Group, USAF, (from RAF Croughton) operated a microwave tower installation in one corner of the site.

1978 - Subsequently used as a H.F. radio station, run by a detachment of 81 Signals Unit, from RAF Bampton Castle, Oxfordshire.

1985 - The microwave tower was replaced, plus an unmanned communications building added.

2010 - The adjacent USAF married quarters were sold to the William Pears Group and renamed Chelston Rise, providing properties available for sale and rent.